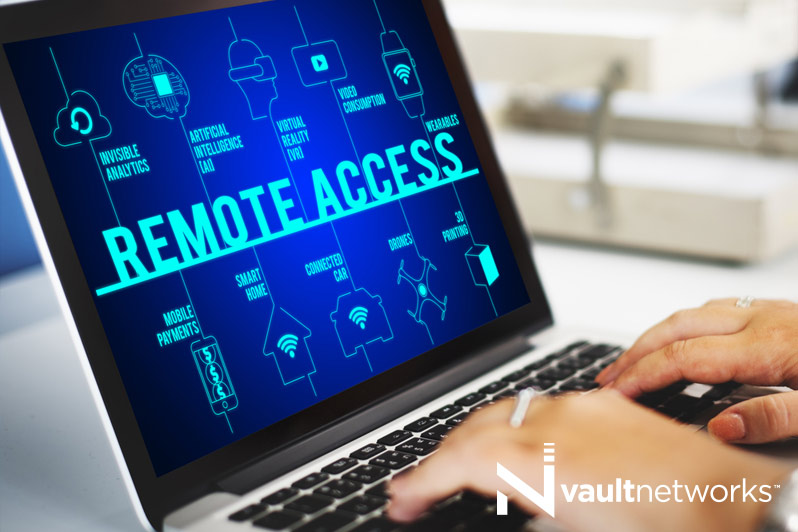 How VPNs Give Employees Remote Network Access Without Sacrificing Security

VPN stands for Virtual Private Network. Today, workers are using different devices to access company information systems such as desktops, laptops, and mobile phones. A VPN is a way of securing access from the endpoint (the user’s device) and the company’s network. The VPN is installed on the devices the employee uses. The VPN then gives the device permission to communicate with the company’s information system – if the network administrator approves the permission. VPNs are secure because the data is encrypted and decrypted during the transmission process.

VPNs have become necessary because employees are now accessing the company network through different means and from different locations. Many company employees work from home, a customer site, or while on the road. While logins and passwords offer some protection, they are not nearly as secure as a VPN.

The key security and practical benefits of VPNs

VPNs offer a lot of flexibility. They can be adjusted so that only certain employees have access. They can be configured so that employees can only access specific parts of the IT system. As an example, a sales representative should have access to his/her customer accounts but should not have access to legal documents or business planning documents. VPNs make sure that only the right people within a company access the right information.

The more remote workers your company employs, or the more freelancers it has, the more sense using a VPN makes. VPNs are also a logical security choice if sensitive information is being accessed. VPNs are a tight way to control your company data

Without a VPN, the data might have to be stored on the employee’s device. This has the advantage of protecting the information, but the downsides are having to store the data somewhere and having to merge the data into the company systems at some point. Alternatively, employees may be forced to come into the office to use the company network.

If the company is not using the cloud, it has to consider the internal network it is using and the devices its employees are using. Some computer products already have a VPN built in, so all that is needed is to configure the VPN. The alternative to ready-made VPNs is to buy a VPN product from a vendor or to download the VPN as an app.

There are different types of VPN solutions that offer different levels of security and practical advantages. Three of the better-known types are PPTP (Point-to-Point Tunneling Protocol), IPsec (Internet Protocol Security), and SSL (Secure Sockets Layer). PPTP is easy to install, but less secure than the others. IPsec is the toughest to use but offers the most options and better security. SSL is the middle choice.

There are other VPN options, including an open-source program called OpenVPN.

As employee workforces change and the devices that are used to access company systems also change, the need for security increases. VPNs are one of the security issues that companies need to consider. They offer a balance between flexibility and security. For information on VPNs and other security concerns, please speak to one of our skilled representatives by calling Vault Networks.

Ready to See How Vault Networks Can Help You?
Got questions? Want to talk specifics? That’s what we’re here for.
Have one of our friendly experts contact you to begin the conversation. Discover how Vault Networks can help you with your Managed Security Services needs.
•  Call: 305 735 8098. Ext. 2
•  Chat with a member of our team to discuss which solution best fits your needs.